At our Defenseman camp you’ll learn critical position-specific skills and tactics, including defensive and offensive skills to gain the extra edge in game situations. Our drills will focus on the defenseman aspects of real game play. Support drills at the point, winning the 1 on 1 battles, attacking the triangle, power moves, odd and even man rushes and checking. These drills will help each player understand their specific position and teach reaction with confidence.

Using a variety of game-situation drills, we teach the defenseman how to angle players to keep them away from the net. In-front coverage, stepping up in the play, and closing the gap while keeping your feet moving. Reversing and breaking the puck out of the D-zone also will be addressed. Players participate in confrontational drills against players in their age group, making the drills more game-like and reactionary. We’ll cover things such as defensive tactics, layering, reversing puck, angling, gap control, net play and puck protection.

Jon Lounsbury, a Winthrop, Mass. native, attended Bridgton Academy for a post-graduate year in 2000-2001 and still holds the school record for most goals and points scored in a season. He received a bachelor’s degree in marketing/communications from the University of Southern Maine (USM) where he was a four-time member of the ECAC All-Conference Team. He also was a two-time college All-American and the all-time leading defenseman in scoring for USM.

Following his collegiate career, Lounsbury played six years of professional hockey — four with the Huntsville (Ala.) Havoc where in 2006 he lead defenseman in scoring with 55 points in 60 games. He also played for the Colorado Eagles and Fort Worth Brahmas.

When his playing career ended, Lounsbury headed back to Bridgton as an administrator. Thanks to an expansive network that extends from Division 1 to Division 3 coaches, Lounsbury successfully placed more than 120 players in NCAA College Hockey. Alumni have moved on to play at various Div 1 and 3 schools. 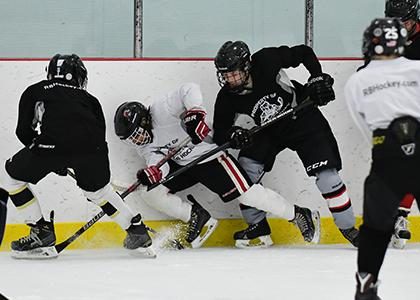